In many dietary supplements for infants and children today, many flavoring agents are often added to increase the flavor, such as grapes and strawberries flavors, so as to increase the willingness of the infants or children to eat. Generally, infants and young children’s willingness to take supplements has increased, which makes those novice parents’ life easier. However, studies have found that the flavor of food will greatly affect the future food preferences and eating habits of the infants and young children.

In the diet of infants and young children, from breastfeeding to the consumption of dairy products or infant formula, and non-staple foods, the flavor of the chosen foods by these infants and young children would actually influence their future food preferences. Besides, these choices could potentially lead to deviations in diet, which may increase the risk of chronic diseases. Therefore, in terms of formula design, infant dietary supplements should specially avoid any food additives that do not come from the original taste of natural food, especially flavoring agents such as artificial fruit flavors.

Let's look at a few interesting studies. In 2007, a survey regarding breast milk on the future eating habits of infants and young children found that compared with babies fed formula milk, the surveys aims at acceptance, eating frequency, and eating response found that breast-fed babies have higher acceptance of peaches. This is because the breastfeeding mothers usually have a variety of different fruits in their diet, the flavor of these fruits indirectly affects the taste of breast milk. After babies are fed with the breast milk, their acceptance of fruits will be higher in the future. This result also echoes a study in 2003 that breastfeeding babies are less picky on foods when they grow up, and are more receptive and willing to try unfamiliar foods. The more significant meaning behind this is that these babies will increase their willingness and consumption of vegetables and fruits in their later childhood growth stages.

The choice of diet is equally important for breastfeeding mothers. In another study, infants were given vanilla-flavored formula milk. These infants consumed more formula milk and had extra power to suck. If researchers let nursing mothers consume vanilla-flavored milk powder, these babies will also notice the vanilla flavor in breast milk and show the same reaction when they suck breast milk. These reactions will affect the acceptance and choice of food and flavor after the baby grows up. Therefore, even breastfeeding mothers must pay great attention to the content of their meals, because the baby will feel the flavor of breast milk. 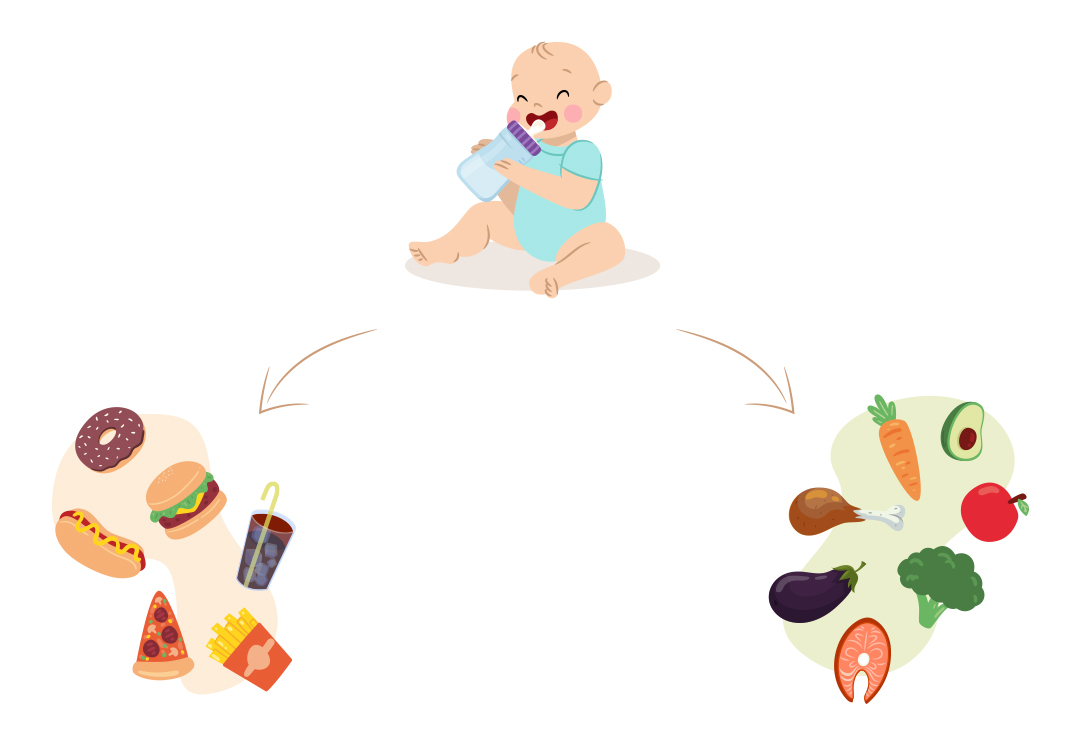 In 2004, an US survey focused on infant and young children’s eating patterns warned that infants and young children’s acceptance regarding vegetables is lower than that of fruits, and 1/4 of children do not even eat a serving of vegetables a day. What is even more concerning is that these children prefer to eat fatty foods or desserts and drinks Instead. And such eating habits are affected from the beginning stage of their life, even extend all the way to grown-ups, and these kinds of food preferences may lead to more chronic disease risks in the future.

By another study in 2002, in which infants and young children were fed different formula milk (including cow milk, soy milk, and decomposed protein) and the study had continued to track their dietary preferences until they grew up to 4-5 years old. The result indicated that different formulas influenced their testing subjects’ future choice of food flavors. For example, compared infants fed with protein substitute formulas with infant fed with milk formulas, the protein-fed infants were more likely to accept more sour flavored juices when they grow up. For the babies fed with formula milk derived from soy, they prefer the apple juice with a bitter taste. The follow-up tracking also found that the babies who were fed hydrolyzed protein or soy formula had significantly higher acceptance of broccoli and other vegetables during childhood. On the contrary, babies who were fed cow's milk formula had a lower acceptance of cauliflower when they grow up. These eating habits kept affecting their future eating choices when they grew into adulthood.

This is not just for eating habits and food selection. There are many additives in food. In addition to artificial flavors and other flavoring agents, there are also many different additives such as artificial colors. These additives are more likely to bring negative health effects, including possible allergies, asthma, and neurological development damage, such as attention deficit hyperactivity disorder (ADHD), abdominal pain or diarrhea, etc. In another animal study published in 2018, it discovered that these spices or flavoring agents were cytotoxic or genotoxic in some animal studies, including subsequent physiological reactions such as significantly reducing the production of red blood cells.

《  Conclusion  》
Citing these documents includes additives that affect breast milk flavor from breastfeeding mothers’ dietary choices, as well as formula milk to fruit flavors in foods. These studies all point to a result. The dietary choices of infants and young children will affect their future growth in the consumption of fruits and vegetables and their dietary preferences, and which will play a key role in their health in the future.

For infants and children, what should we pay attention regarding their diet?

1. In dietary supplements for infants and young children, avoid to choose products that contain flavoring agents such as fruit flavors.

2. Try to avoid products containing artificial additives, artificial flavors and colorings, etc., so that infants and young children get used to the original flavor of the food. Regardless of whether the label indicates natural flavors or artificial flavors, it may affect the acceptance of vegetables and eating habits in the future.

3. Nursing mothers should properly balance the food they eat, use natural ingredients as the main ingredient, and avoid eating foods with additives or artificial flavors.

After the baby is born, the parents want to give the baby more complete nutritional supplements for the sake of baby's health. But when you give your baby dietary supplements, when he/she inadvertently eats harmful fruit flavors or other flavorings, which will affect his/her future growth and behavior. It’s like to put the cart before the horse. The baby grows only once, we should definitely be more careful about food choices.